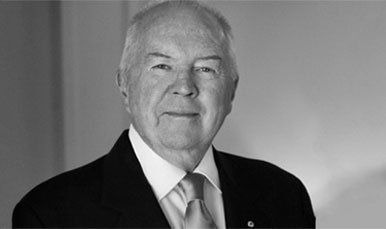 Michael Bryce is an architect and designer acknowledged in Australia and overseas for his distinguished work in graphic, urban and environmental design.

In 1968, he commenced his own architecture practice in Brisbane, developing a special interest in graphic design. From 1979 to 1983, he was Federal President of the Industrial Design Institute of Australia. He was also a member of the Design Board and the Design Council. His practice has won awards for graphic and environmental design, including the RAIA (Qld) Civic Design Award, the House of the Year Award, and the RAIA President’s Award. The practice has also received many citations in the print industry and Design Institute awards.

In 1988, his practice joined the worldwide Minale Tattersfield Design Strategy Group with offices in London and Paris and clients worldwide including Harrods, San Pellegrino, FA Premier League, BNP, and the Eurostar train.

Beginning in 1992, Michael Bryce became the principal design adviser to the Sydney 2000 Olympic Games, designing the Olympic bid logo and advising on the application of the corporate branding. His sport-related design work also includes graphics for the Brisbane 1982 Commonwealth Games and Expos ‘85 and ‘88. His sports logos have included the Australian 1996 Commonwealth Games team, the Dolphins Australian Swimming team, the Wallabies Rugby team, and the world cricket body, the ICC.

In 2006, he was made a Member of the Order of Australia (AM) for services to the design profession and the community. He has been awarded Honorary Doctorates by the Universities of Queensland and Canberra and is presently Adjunct Professor of Architecture and Design at the University of Canberra.